Baking has always been one of my favourite activities, particularly during the colder months. When I first converted from vegetarian to vegan, the thing I was most concerned about wasn’t cheese, but baking. Can you even make an eggless cake?

A lot of the things I’d learnt about baking over the years, what I’d considered the fundamentals, were suddenly useless in my pursuit to retain my hobby. It was as if the pillars of a building had been taken away and the roof was expected to stay up. Of course, since then, I have learnt a lot about the versatility of plant-based ingredients and that it is very much possible, and not at all difficult, to bake without eggs, or indeed any animal products.

With a little imagination, research and experimentation, I have managed to veganise my favourite festive bakes. There are still plenty of recipes out there I would love to try, and plenty more experimentation to do, but for now I’m going to share the flavours I love to use in my baking during winter, and some examples of the recipes I use them in.

This is such a classic festive flavour, I love making both gingerbread cookies and ginger cake around Christmastime. I’ve made a couple of gingerbread houses with varying success over the years and will definitely be attempting one this year, so keep an eye out for that!

My favourite place for mixed spices is hot chocolate. Straight forward, simple hot chocolate is amazing as it is, but once the year has stumbled over Halloween and begins it’s sprint towards the new year, I think this popular beverage benefits greatly from a little extra richness and warmth. When I had regular early starts in my routine, the promise of a spicy hot choccie was just enough to lure me out of the cosiness of bed and downstairs to the darkness of the kitchen. 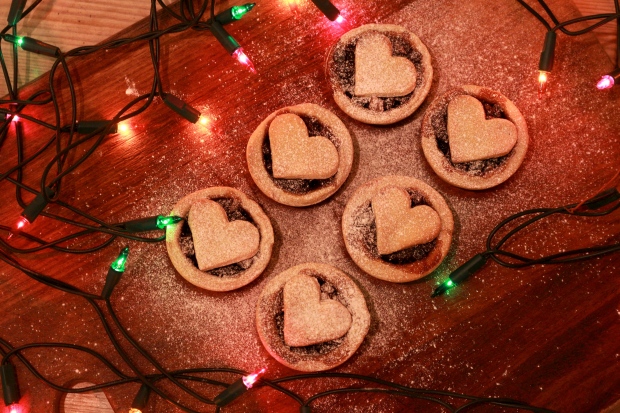 Okay, I’m not going to lie, I absolutely adore chocolate the whole year around. BUT, at Christmas, the yearning for something indulgent and warm, combined with my ubiquitous chocolate cravings, makes for a high frequency of hot chocolatey puddings in my household. The best concoction is fresh, steaming chocolate cake out of the oven, drizzled in sauce and drowned in custard. I’d be happy to share my vegan version of this if anyone’s interested, just let me know in the comments or on Twitter!

My other chocolate highlights include: chocolate cornflake crispies, sticky fudge brownies and a plethora of vegan chocolates from my local health food store. Oh, and of course I have to make a traditional yule log every year – that will be coming to the blog very soon!

Last year I discovered a vegan brand that does chocolate (yep, again) covered honeycomb bites, and I fell in LOVE. Honestly, put a bowl of these on the table on Boxing Day and I will be one happy human. I might attempt to make my own version of these for this festive season, as it can be expensive to keep replenishing a stock of something so moreish.

Oranges are one of the only fruits that don’t immediately make me think of the warmer months, and I think this is why I like them so much in December. As well as eating the actual fruit, I sometimes make a chocolate orange cake that seems to go down pretty well in my family. And on a side note, I have also been into decorating my house with dried oranges this year!

Probably my favourite spice, I definitely overuse cinnamon in Winter. A slightly tangential thought, but my family often make a lentil sauce which is flavoured with cinnamon, and this is definitely a staple meal for us during the darkest months of the year.

Back to sweet things though: cinnamon rolls have become one of my new favourite treats, and this recipe by the Minimalist Baker is by far my favourite!

This is a new favourite, ever since the success of my first ever batch of vegan biscotti. I’ve never really liked marzipan, and for some reason this has steered me away from sweet almond treats in the past, but this might be a new contender for future Christmases.

I don’t think I specifically make anything that’s just vanilla flavoured at Christmas, but there’s something about a lot of the other flavours in this list that complement vanilla so well; this is how a teaspoon or two of vanilla extract seems to end up in everything I bake during the festive season Vanilla adds a little extra indulgence.

If you’d like to hear more about any of the recipes mentioned in this post, I’d be happy to write blog posts for them, just let me know!

What flavours do you like to use at Christmas?

Want to read more Blogmas posts? Scroll to the bottom of Day One for the full list.